Even before critics saw a single frame of Venom the signs that it may not be particularly good were hard to miss. Firstly Tom Hardy suggested his favourite 40 minutes were missing from the film, a claim he then had to frantically walk back a few days later. Then there were the shots of Riz Ahmed at the photocall looking like someone was holding his family hostage. And finally the fact that the press embargo for reviews was up on the day of release all suggested very loudly that perhaps all concerned were aware that Venom isn’t a cinematic gem. So is it any good? No of course not. But it is ridiculously good fun.

Tom Hardy plays Eddie Brock, a rough and tumble investigative reporter with a popular show The Brock Report. Eddie is living with Anne (Michelle Williams classing up the joint in a role she’s way too good for) and her cute cat in a lovely apartment. Eddie is asked by his boss to go and do a puff piece interview with Carlton Drake of the Life Foundation (Riz Ahmed playing a cheerfully slimy Elon Musk type). Drake is a bona fide genius and space fanatic whose latest rocket expedition comes crashing to Earth in the opening seconds bringing all manner of nasty alien symbiotes with it. Brock’s vanity can’t cope with doing a simple interview as he knows in his gut that Drake is a wrong un because Eddie is just that sort of cliché “does whatever it takes” hard nosed, asshole reporter. So Eddie surprises Drake with difficult questions in his interview about cases against him, info he gained from confidential files on Anne’s computer. This is a terrible move which unsurprisingly gets both Eddie and Anne fired and Anne very wisely ditches him. Several months on Eddie is living in a shitty apartment and un-hireable. Enter Jenny Slate (her character does have a name but let’s just call her Doctor Red Shirt). Doctor Red Shirt is unhappy that Drake is trying to get the symbiotes to bond with people (achieve symbiosis) and is using the poorest of society to do it. Eddie, gosh darn it, just happens to have a heart of gold under that gruff exterior and after a false start or too breaks into the lab to investigate. At which point Venom decides to hitch a ride with Eddie and chaos ensues.

The film’s major problem is that it takes far, far too long to get Venom into Eddie and as soon as the two are bonded the film practically races to the inevitable climatic CGI bad guy fight. It’s like the entire middle section of the film is missing. There’s a couple of decent action sequences, a spot of comedy and then boom we’re at the end credits. Eddie and Venom really needed to become one much quicker. You don’t get much chance to get know Venom as a result and given he’s a really quite minor character in the Spiderman universe that’s a problem.

Tonally it’s also all over the shop. The beginning with the symbiote escaping from Drake’s ship is surprisingly brutal suggesting a Deadpool style level of violence. But then the film immediately shies away from that to a much more campy tone. I’d be intrigued to know what ended up on the cutting room floor as the shifts in tone strongly suggest studio interference.

There’s also the inevitable villain problem. CGI bad guy showdowns just do not work guys. They’re so overplayed at this point it’s ridiculous and you can feel the audience nodding off. At least this one is swift but they would have been better off leaving Riz Ahmed symbiote free, he does a very nice line in dead eyed, silky menace.

Still it’s nowhere near as bad as the critics are suggesting. Tom Hardy manages to make Brock if not charming then at least someone we can root for. His vocal work as Venom is impressive and he does a nice line in apologetic, jerky “oops my body is being controlled by someone else” fighting (see also the recent film Upgrade (starring Hardy look alike Logan Marshall-Green for more brutal examples). Hardy is also surprisingly funny in the scenes where he completely loses it in front of Anne & her new beau in a fancy restaurant. 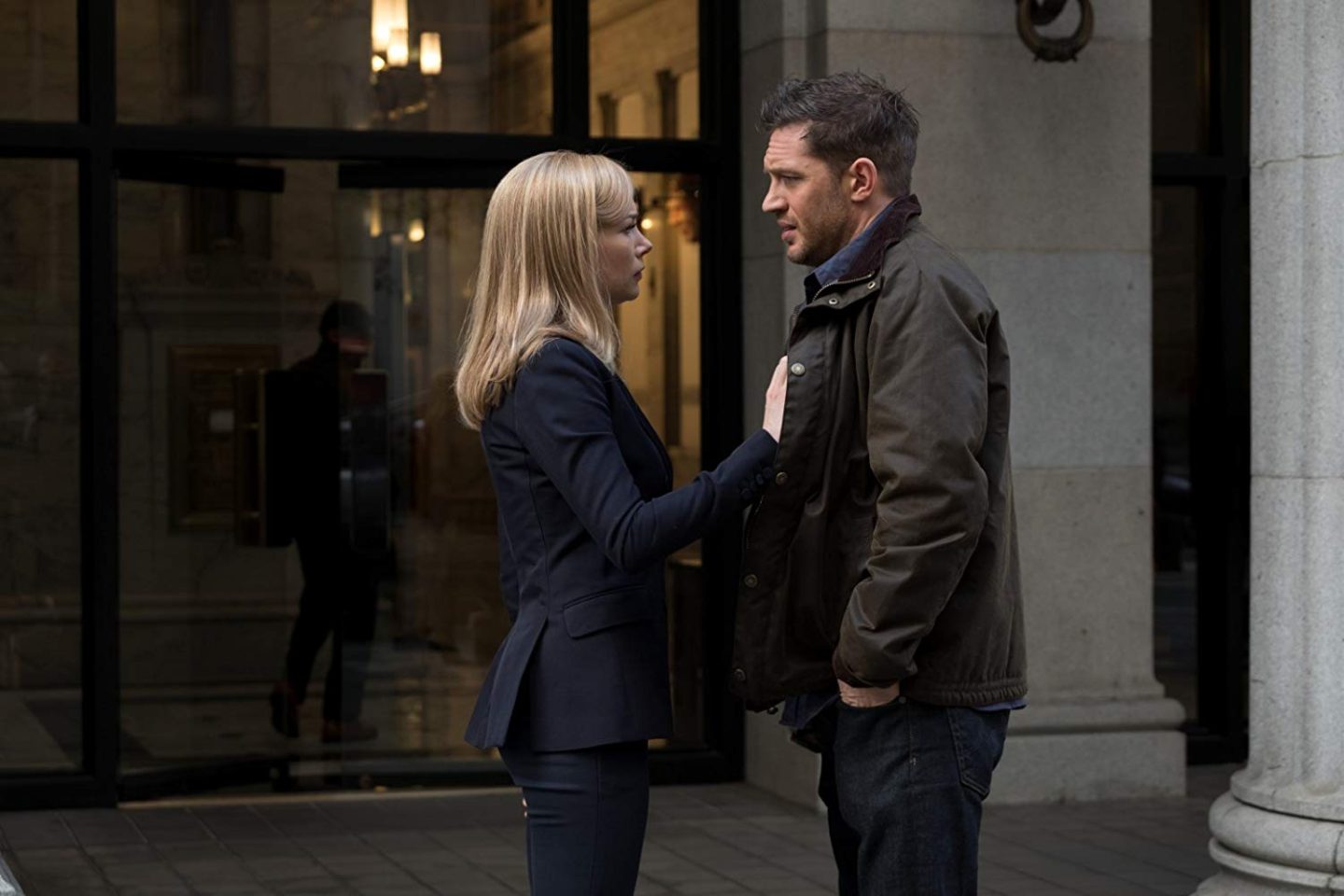 Michelle Williams is luminous in a badly underwritten role but she’s the heart of the film. Also praise be to Tom Hardy for insisting on an age appropriate love interest. That shouldn’t be as notable as it is but given it’s routine to see say Tom Cruise (56) being paired with Rebecca Ferguson (34) in the Mission Impossible films Hardy insisting on a screen partner who is only 3 years younger than him seems positively revolutionary. Riz Ahmed does great things with what he has to work with even if his dialogue often seems to come from a “mad genius dialogue” generator. Jenny Slate is tragically wasted but hey it’s always nice to see her on screen. Scott Reid is also charming and very likeable as Anne’s new beau and I found it refreshing that Anne was allowed to have a nice, kind boyfriend who actually genuinely tries to help his girlfriend’s ex.

Mostly I just really liked that the film doesn’t shy away from the fact that Eddie, despite being our “hero”, is a total loser. The unspoken but clear message is that Venom and Eddie achieve symbiosis so quickly because they are both complete douchebags. Eddie doesn’t get fired from his fancy network job because Drake is just that evil and his boss spineless. No he gets fired because he goes off half cocked not having properly investigated and having stolen the facts he does have from his girlfriend. Ronan Farrow he is not. Eddie is a crappy investigative reporter who lets his ego get in the way of his reporting and is justifiably fired for it. Nobody ruins Eddie but Eddie. In an era of such rampant toxic masculinity it’s almost brave to see a film, even a daft one like this, holding its hero to account for his failings. Eddie doesn’t even get to be the hero, not really. Anne is repeatedly shown to be the brains of the operation and gets to save the day.

Plus it’s just good fun- we all need a bit of happy distraction these days and Tom Hardy looking exceptionally handsome while talking to himself and beating up bad guys is what a girl needs right now. Or this one anyway. Watching Venom won’t change your life but it will cheer you up for a couple of hours. And hell if nothing else it’s worth it for the extended clip of Into the Spider Verse at the very end!

Venom is in cinemas now.