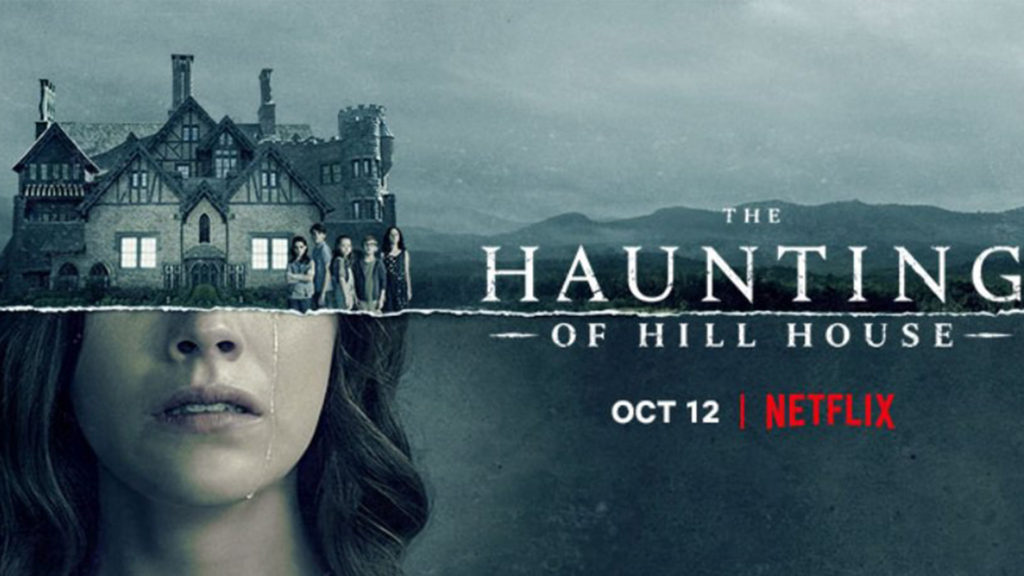 “I write about haunted houses. And haunted people. No shortage of those”

The Cranes are haunted. Years ago for one fateful summer they lived in Hill House. But some houses are not meant to be lived in and their stay there ended with death and the family fleeing, terror stricken in the dead of night. Reunited by a tragedy years later they discover that Hill House isn’t quite done with them yet.

The Haunting of Hill House by Shirley Jackson is one of the most terrifying books ever written. Its tale of a malevolent house that feeds on all who are foolish enough to dwell within its walls is pure nightmare fodder. This new series from Mike Flanagan (Occulus, Ouija: Origin of Evil) isn’t a straight adaptation of the source material but more of a re-imagining. Gone are the scientists and the paranormal investigations replaced instead by Hugh (Henry Thomas) and Olivia (Carla Gugino) Crane, architects who move into Hill House one summer intent on doing it up and flipping it for a huge sum of money. He fixes things, she designs things and together they work perfectly. They are accompanied by their large brood of children – Steven (Michael Huisman) who grows up to be the sort of douchebag writer who leverages the family tragedy for profit and then takes umbrage when it’s all his fans want to talk about at book signings, Shirley (Elizabeth Reaser) an uptight funeral director who inherits her father’s desire to fix the world around her, Theo (Kate Siegel), a commitment phobic lesbian psychologist with a unique gift and the twins Luke (Oliver Jackson-Cohen) a recovering addict and Nell (Victoria Pedretti) a sensitive soul and tragedy magnet with major mental health issues. The show moves between timelines, Hill House then and now with the first five episodes showcasing each of the Crane children in turn.

Purists may well balk at the changes to the source material but Flanagan manages a way of staying true to the spirit of the book while keeping things fresh. We’ve now seen so many shaky cam found footage horrors which focus on paranormal investigations in haunted houses that Jackson’s original set up would ironically seem dated now. Books play on our imaginations in a way that films can’t quite emulate and so the series was never going to be able to capture the sheer terror that Hill House evokes in the readers of the novel. Nor can film capture the insane geography of Hill House with its ever changing corridors and strange rooms. But Flanagan replaces the terror of the novel with an all pervading sense of dread and a sadness so suffocating it’s almost unbearable at times. Plus it’s not like the series skimps when it comes to the ghosts. The jump scares sprinkled sparingly throughout are executed very effectively and Flanagan infamously packed the background of many shots with hidden ghosts. Some I spotted, others are only revealed in terrifying freeze frame. Flanagan knows that true horror isn’t a cgi ghost lurching out at you but the horror of a person lost in a constant destructive spiral of addiction, the horror of profound mental illness eating away at your sense of safety and security, the horror of feeling your mind spiral away from you until you can’t determine what is or isn’t reality. Yes there are ghosts dwelling in Hill House but grief and mental illness haunt the Cranes just as much.

Episode 6 of the show is a technological marvel and a triumph of direction and design. Shot in 5 long, SFX laden takes (as detailed here by Flanagan) it seamlessly transitions from the present to the past with the ever swirling camera taking us through a day (and night) in hell for the Cranes.

The performances vary but overall are very strong. The child actors are incredible given that large parts of their screen time involves them looking either deeply confused or terrified. Michael Huisman is great as Steven, a condescending sell out of a writer deeply terrified of falling victim to the family curse of mental illness. Siegel is great as the no nonsense, sexually adventurous and sensitive Theo. Oliver Jackson-Cohen (fantastic in The Man in an Orange Shirt with the equally brilliant James McArdle) manages to capture the innocence and sensitivity of his frankly adorable child actor counterpart in the adult Luke even when lost to drugs. Victoria Pedretti is deeply moving as Nell who suffers so very greatly, haunted eternally by both her past and her future. Her showcase is the standout of the character episodes and would move the hardest of hearts to weep. It is arguable that perhaps she is the gothic horror equivalent of a manic pixie dream girl. Nell is beautiful, ethereal and suffers terribly because the plot requires her too. She has no real life or personality outside of her connections to others – she’s the wife, the daughter, the twin, the sister. We never learn quite enough about Nell the person. None of this takes away from Pedretti’s perfectly calibrated, sensitive performance.

The shows best turns however are the adult Cranes, Henry Thomas (best known as Elliot from ET) and Carla Gugino. Thomas is wonderful as the dad who just wants to keep his family safe and fix everything. He’s so kind and he loses so much it is hard to bear. It’s an unshowy but deeply engaging everyman performance that grounds the more fantastical elements of the show. Hugh is our gateway into this world and as fine an actor as Timothy Hutton is I would rather have spent more time with the younger Crane. 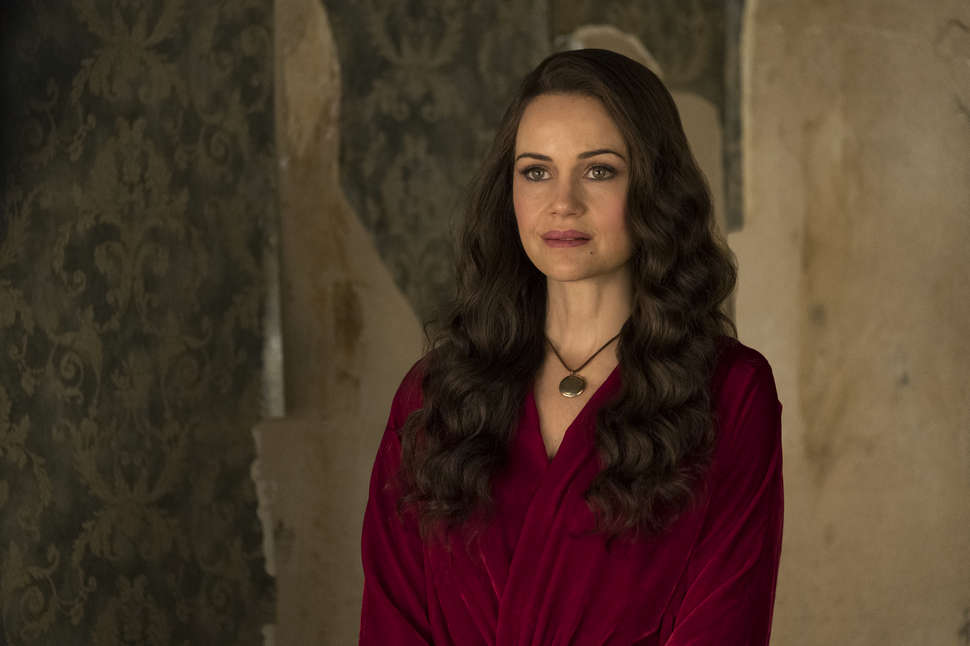 Carla Gugino is eternally underrated (loved her brittle turn as the original Silk Spectre in Watchmen) and is the show’s most valuable player as the brittle, fiercely protective mother. She has to give the sort of no holds barred high drama performance that could have turned to pure camp in lesser hands. Anyone who has ever had the slightest brush with depression or mental illness won’t fail to be moved by Olivia’s deterioration as Hill House feeds on her mind and soul. Aesthetically Gugino also looks like I always imagined women were meant to look when I was a little girl – all long flowing glossy hair, golden gleaming locket, soft voice and silky negligee and nightgowns. All her outfits in Hill House are pure gothic romance heroine, beautiful silky flowing dresses which stand in marked contrast to the more practical outfit she wears on the day she moves in.

The show falls a little at the final hurdle. After a very clever reveal regarding the infamous Red Room the final showdown with the house from hell feels a tiny bit anti climatic. Vast swathes of the dialogue in the final episode are pure Hallmark greeting card elevated only by the performances of the cast and The Newton Brother’s beautiful music. It also descends into pure schmaltz in the final 8 minutes. Was I moved? Yes no question but the emotion felt slightly cheap and manipulative. There is no question that the ending is earned and deeply cathartic but it would have been a stronger piece if it had ditched the last montage set to cheesy music.

The Haunting of Hill House is a bold, sad and profoundly moving look at grief, mental illness and the ghosts that haunt us all.

The Haunting of Hill House is available worldwide on Netflix now.