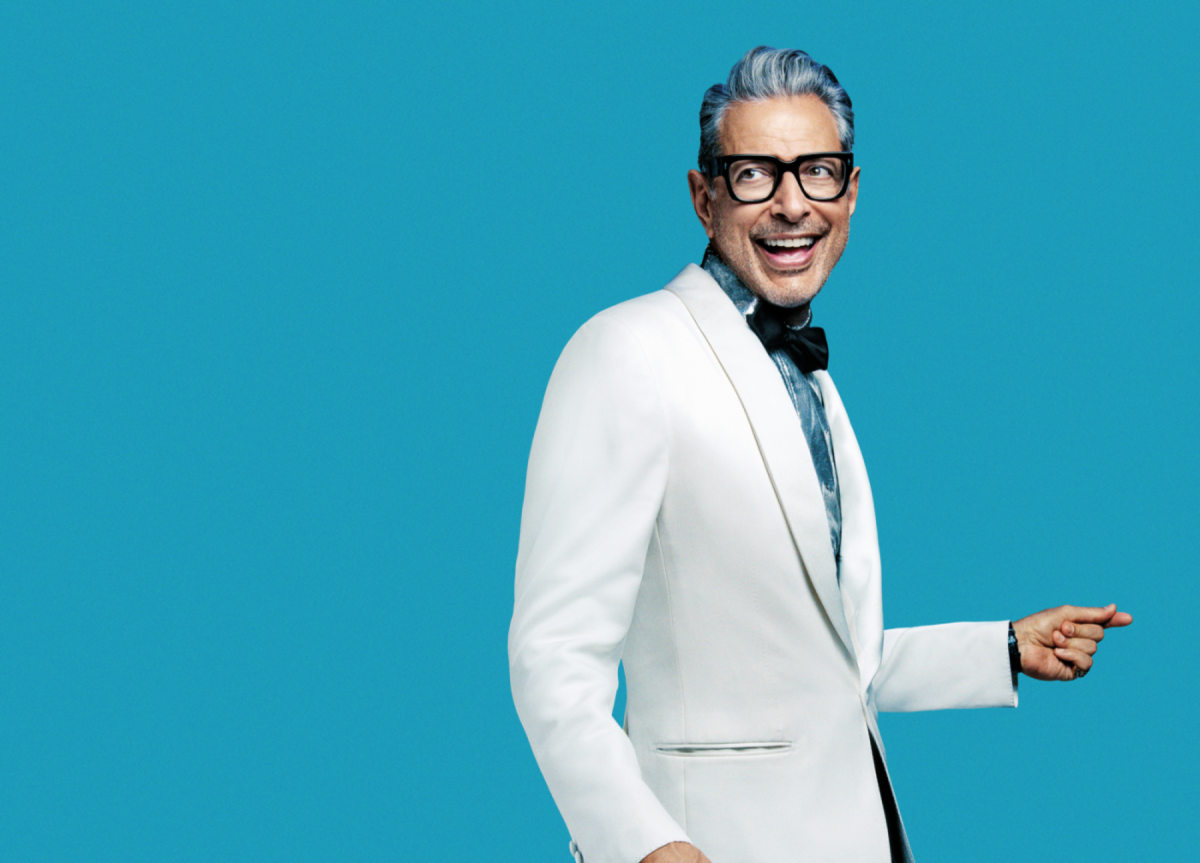 So Jeff Goldblum, actor, dinosaur expert and internet god has a jazz band. Because of course he does. He’s just that sort of guy. The man exudes the sort of effortless cool that would have Ryan Gosling in La La Land weeping, prostrate at his feet. Goldblum has always looked like he might be the sort of person who could produce a jazz band out of thin air and lead nearby revellers in a Pied Piper style parade so it makes sense that he actually does have a band of his own. Jeff Goldblum and the Mildred Snitzer Orchestra (for that is their name) are in London hawking their wares and their first album The Capitol Studio Sessions. Thanks to a kind friend I ended up with a front row ticket to see Goldblum at Cadogan Hall as part of the London Jazz Festival.

When we walked into the auditorium 10 minutes before the show was due to begin Goldblum was already on stage playing the movie game with members of the audience where we had to name an actor and then follow them through movies 6 degrees of Kevin Bacon style until we ended up with a film Goldblum had been in. He had members of the audience sing snippets of national anthems. He handed out his cough sweet wrappers to members of the audience (I was the proud recipient of one such wrapper and he then spent time looking at my tattoo). He asked us to guess the flavour of his cough drops and his star sign. And he taught us the words to the Jurassic Park theme which we had to sing along with him “In Jurassic Park, Scary in the Dark, I’m so scared that I’ll be eaten…” Yes it was every bit as insane as it sounds and the show hadn’t even started yet.

This rather set the tone for the rest of the evening which can best be described as parlour games with Jeff Goldblum with the occasional jazz number. I do not in any way pretend to be a connoisseur when it comes to jazz – too much of it sounds like Ron Burgundy playing jazz flute to me. But hey Goldblum’s presence got me to a jazz festival and I suspect that was true of many in the audience. To my jazz novice ears his band was extremely good and they all vibed well with Goldblum – you could tell they’d known each other for years (Goldblum plays the piano in case you were wondering). Their most valuable weapon was their guest star, Irish singer song-writer Imelda May who has a slinky stage presence and a smoky voice to die for. It was worth the price of admission to see Goldblum justifiably making heart eyes at her. May also read one of her poems and she’s quite the talent.

In-between the jazz numbers Goldblum would play games with the audience. This included getting members of the audience up on stage to read out poshed up versions of movie lines which the audience then had to guess “Excuse me sir would you know the whereabouts of my automobile” being the posh version of “Dude where’s my car?” etc. We then had to school Goldblum on whether the British slang he was reading was correct and guess the Shakespeare play from the lines he read out. Now a more uncharitable soul than myself might suggest that this was an effective way of bulking up what would have otherwise been a rather slight 40-ish minute set into a 90 minute set the audience wouldn’t complain about paying £45 for. But frankly only someone as obscenely charming as Jeff Goldblum could get away with with playing what skirted dangerously close to panto style games with the audience and not only charm the pants off every single audience member (yes even the men and don’t pretend otherwise boys) but manage to be just ridiculously cool and charismatic while doing it. At the interval while the band retreated Goldblum remained on stage doing a loose Q&A and was unfazed at everything including the woman who leapt from the back to show him an ancient production book of Goldblum in a film noone knew or the selfie line which formed the second he slightly unwisely moved off the stage. It was a gloriously silly and wonderfully enjoyable evening with some great music. Goldblum seemed to enjoy every single minute of the performance and when he said he was having the best time of his life I believed every word.

Jeff Goldblum and the Mildred Snitzer Orchestra’s first album The Capitol Studio Sessions is now available to stream or buy on cd or vinyl.