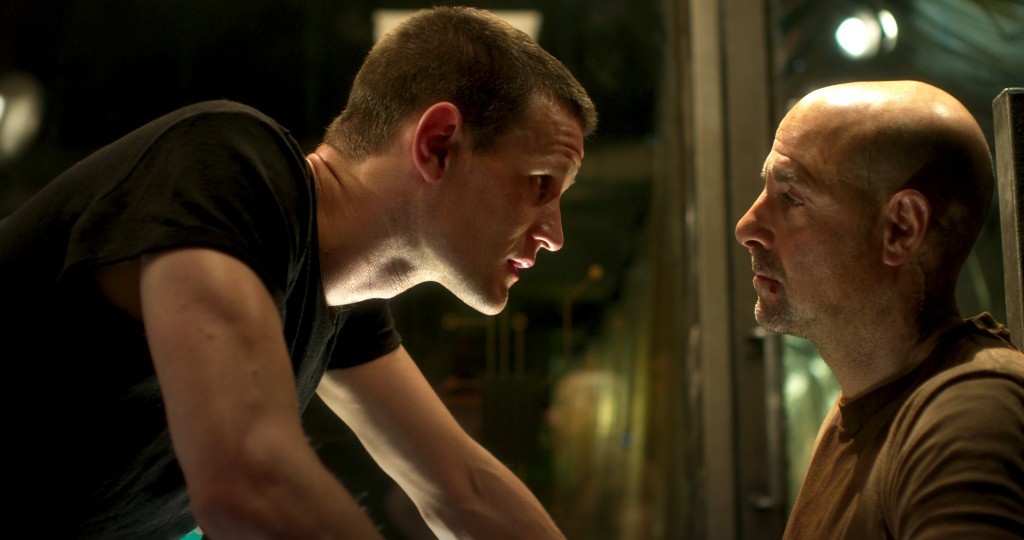 Earlier this year at London Film & Comic Con I bounced perkily up to Matt Smith who was appearing there & told him his new film Patient Zero (the trailer for which had just been released) looked great fun. Smith with commendable honesty gently suggested that I would be better off saving my money. But the film popped up as part of Amazon Prime’s £1.99 rentals for Black Friday so I decided to give it a whirl. And well always trust a Gallifreyan as he wasn’t wrong so high five there Matt for looking out for your fans. I mean… as B movie zombie flicks go it’s not the absolute worst I’ve ever seen.

A new strain of incurable rabies infects humans turning them into rage crazed, violence junkies who massacre anyone they meet. As the infected start to outnumber the uninfected humanity is forced into hiding. Secluded in a nuclear bunker is Gina (Natalie Dormer, Game of Thrones) a research scientist who is desperate to find Patient Zero -the first person infected and whose blood they desperately need to reverse engineer a cure to the virus. Helping her is Morgan (Matt Smith, Doctor Who, The Crown) who has an immunity to the virus meaning that even though he was bitten he didn’t turn. Morgan has been changed enough by the virus that he can communicate with the infected (who sound like they’re just snarling to everyone else) and he interrogates the infected trying to find the elusive Patient Zero. Along for the ride are a wildly misogynistic Colonel (Clive Standen) who is upset that his superior has a vagina, a chirpy, friendly lab tech called Scooter (John Bradley, Game of Thrones) and Janet (Agyness Deyn, Hard Sun), Morgan’s infected wife who is being treated by an experimental vaccine made from Morgan’s blood. As is so often the case with low budget films like this the entire cast (with one notable exception) is British and yet apart from Dormer, who gets to keep those crisp RP vowels of hers, everyone else sports mildly dubious American accents. Guys just make them a British research team. I feel some of the performances might have improved if the actors weren’t so focused on doing an accent.

The film’s biggest problem is that it simply takes far too long to get going. The first half sets up the relationships between the characters with poorly filmed flashbacks to Morgan and Janet’s pre-outbreak romance (Smith and Deyn have zero chemistry which is fatal to that story strand and, being kind, as scene partners it would be fair to say they don’t bring out the best in each other). Every scenario plays out exactly as you would expect and the dialogue is pure telenovela. A declaration of love & the world’s speediest pregnancy had me cackling in mirth.

Things pep up considerably 40 minutes in with the arrival of Stanley Tucci (The Hunger Games). Tucci is clearly slumming it for the pay cheque but the man is worth every damn penny. Tucci plays an articulate, calculating member of the infected who thinks that they’re the next step up in the evolutionary chain and that humanity deserves to be wiped out. And then naturally all hell breaks loose…

So Patient Zero is 28 Days Later meets The Omega Man without being as good as either. It’s not even as good as the terrible I Am Legend as that at least had Will Smith’s charm to propel it. Patient Zero shamelessly thieves Danny Boyle’s iconic “rage zombies” from 28 Days Later but does nothing new with them. The cast do their best but while Dormer has some fun moments putting the Colonel in his place she’s largely lost once the action gets going reduced to shrieking and flailing. Matt Smith is charming enough but this is a poor showcase for his talents.

It’s frustrating as there is clearly a more interesting film here struggling to emerge. Tucci is a superb antagonist and needed far more than the 10 minutes of screen-time he receives. The rage zombies have a fascinating design with notable stripe/slash style marks on their faces and bodies and yet no attempt is made to explain this. Threads like Janet’s infertility and Morgan’s fight against the virus infecting him are raised and then instantly dropped. One fun meeting with a zombie rat aside the action sequences are unspectacular and filmed in a way that you can barely see what’s going on. The internal logic is also faulty -I mean they’re in a nuclear silo which Tucci’s baddie has to breach Trojan horse style & yet all the other zombies just stroll right in? Everyone else is locked up. How they’d get in? And the unhurried manner of some of the action sequences is hilarious. Nothing is as funny as a flashback of Tucci very slowly and genteelly trying to escape from a zombie. It feels like a movie butchered in the edit -Smith’s unwise voice overs speak to some panicked post production salvage attempts. And the ending is verging on laughable.

Patient Zero is a mildly entertaining B Movie zombie flick that’s a fun undemanding watch if you’re a fan of any of the actors involved.