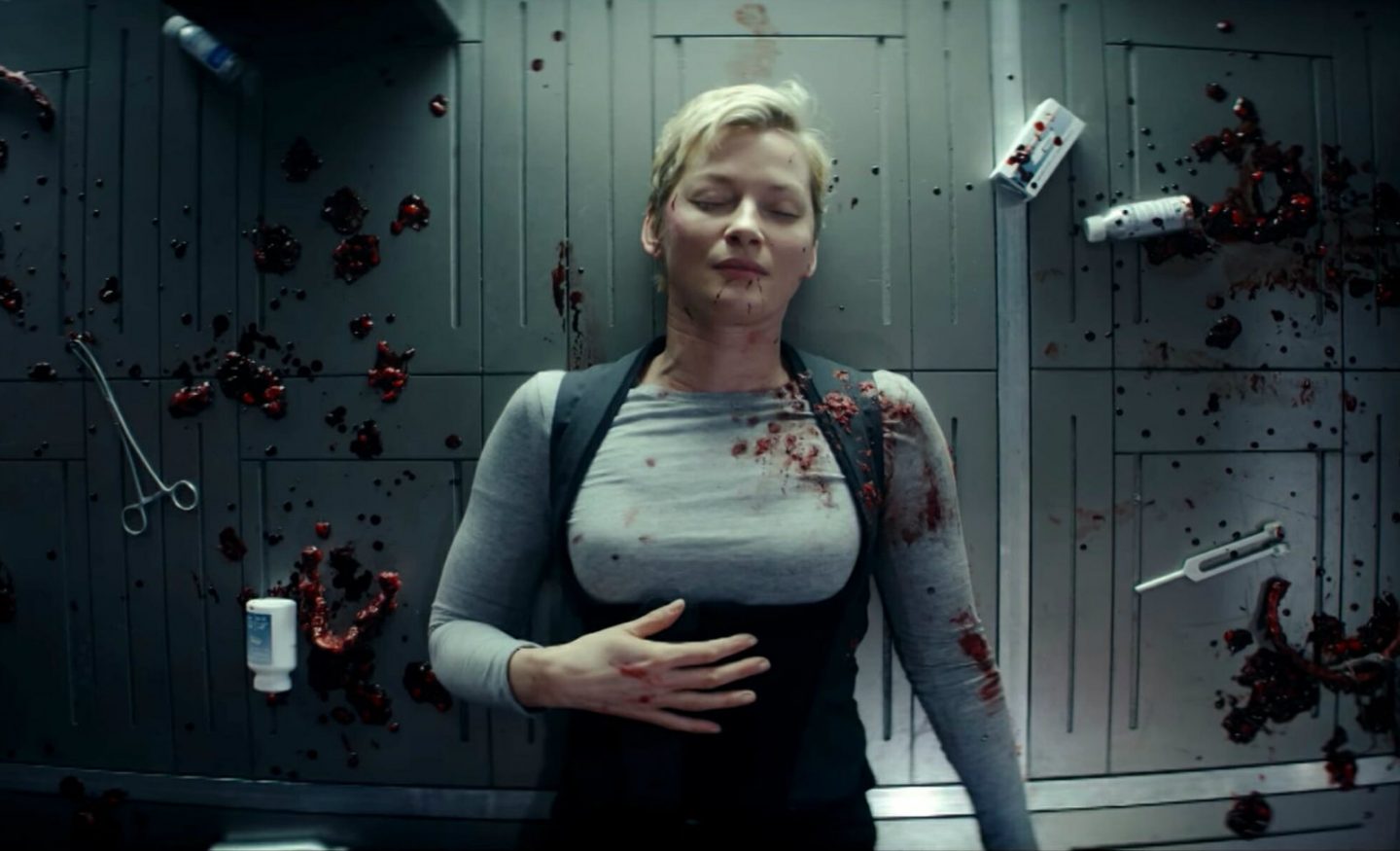 We open on a lab in a space ship where shit has quite clearly hit the fan. A blonde doctor (Gretchen Mol) is hiding from a beardy weirdy with an Aussie accent (Angus Sampson) who is doing his best impression of Jack Torrence from The Shining. Managing to temporarily evade him Blonde Doc sends a panicked message on a recorder which she jettisons from the ship. It’s not a distress call but a warning to future travellers not to board the Nightflyer or to attempt to bring it back to Earth. After incapacitating Beardy Weirdy, Blonde Doc then very graphically offs herself with a bone saw. And that’s only the opening sequence!

We then flash back to the beginning of the Nightflyers journey although this show is so spectacularly bad at the basics of storytelling that it doesn’t actually put up a title card to show you the passage of time (even though it does that 2 scenes later) so I spent 15 minutes trying to work out if the opening scene was another reality, another crew, a flash back, a flash forward or just plain old evil clones. But it’s a flashforward people. I’m here to help. It’s the future and the Earth is an unsurvivable trash heap. Karl (Eoin Macken), hereby known as Hot Prof has discovered an anomaly in the sky and is convinced that it is an race of aliens called The Volcryn. So Hot Prof puts together a team to go chat to the aliens who live in a scary sounding place called the Void which can only be reached by a ship called the Nightflyer. The Nightflyer is captained by Captain Eris (David Ajala) (or Captain Extra as I call him owing to his tendency to speak every line as if he is declaiming in the style of a Shakespearean actor in the 1920’s). Hot Prof also has a dead daughter who shows up constantly on the ship clad in the finest Don’t Look Now fashion of a red slicker.

Joining Hot Prof on his quest is Beardy Weirdy (a xenobiologist), Thale (Sam Strike), an L1 telepath that Hot Prof thinks will be useful to communicate with the aliens (think Professor X from The X-men only with a “come at me bruv” Sarf London accent), Blonde Doc who is Thale’s therapist, Lommie (Maya Eshet), a huge sad eyed non-binary character with bio-electrical interfaces that allow her to communicate with the ship’s computer like something out of The Matrix and Mel (Jodie Turner-Smith), a human genetically engineered to survive in space who immediately hooks up with both Lommie and Captain Extra.

Problem is something on the Nightflyer doesn’t seem to like the crew. With the crew suffering from terrifying apparitions and strange, often fatal accidents will Hot Prof and his plucky band of travellers reach the Volcryn? And by the time you reach the end of these 10 looong episodes will you care anymore?

Nightflyers was a short, punchy, horror novella from George R. R. Martin (whose name is plastered all over this adaptation despite him not writing a word of it due to the exclusivity clause with HBO re Game of Thrones) about a haunted ship in space. As an adaptation of the book Nightflyers is remarkably poor, as a stand alone series it’s an uninspired mash up of Event Horizon and Interstellar. Despite the Netflix Original Series tag it’s actually a co-production with SyFy (not always known as the benchmark of quality) who burned it off half-heartedly by airing it over the space of a week last year with minimal fuss which speaks to how proud (or not) they were of the result. I binge watched the entire thing while barely awake and suffering from the after effects of the flu having already been warned by a friend that the 10 episode time investment wasn’t worth it. And she wasn’t wrong.

The series starts off reasonably well as a 2001/Event Horizon clone with something on the ship merrily causing chaos. Creepy apparitions and occasional spurts of gore are timed every few minutes to keep you awake and to be fair there is a decent sense of encroaching dread. However that element vanishes rather quickly following a silly twist at the end of episode 3 and then the series becomes a half hearted rip off of far superior “alien contact” films like Contact and Interstellar. There’s even a divergence into religious mania in a stand alone filler episode (episode 6) which you can (and absolutely should) skip.

My biggest issue is that given that this is a series where each character speaks fluent exposition all the time the show is incredibly bad at it and indeed the basic tenants of storytelling. At no point does the show ever explain why the aliens are called the Volcryn, or how we know about them given that the series makes it clear that the Nightflyer is seeking to make first contact with an unknown alien race. It doesn’t explain why Hot Prof is so convinced that the Volcryn are the only hope for humanity or why it doesn’t seem to have occurred to him that they might be hostile. Nor do we understand why everyone on the Nightflyer, which is a colony ship, not a scientific or tactical vessel would be so convinced of Hot Prof and his assertions of alien life that they would upend their entire lives and go on what effectively could be a suicide mission by flying into the void to meet them. I mean why in god’s name are there colonists on this ship? What’s in it for them? All we see is one short scene of Hot Prof’s colleagues laughing in his face at his assertion that the anomaly he’s found is a spaceship and two seconds later boom he has an entirely manned ship out there looking for them. We’re never told how Hot Prof knows any of Mel, Lommie or Beardy Weirdy or why they would be loyal to him or his mission. We’re never shown why Hot Prof is trusted or why anyone respects his findings. The show just takes it as fact that the aliens exist and that everyone is super invested in making first contact with them but it doesn’t ever attempt to show us why.

The world building in general is terrible. We have a vague notion that Earth is falling apart and viruses are ravaging the population but it’s not expanded upon. We get the general gist that Thale is a powerful X Men style mutant a la Professor X but no details of how the L series humans came to be or any of their back story. It’s thrown into the story that Mel is genetically engineered (crucial to the novella) but we never understand whether that’s routine or if she’s unique. Apart from one early sequence the fact that she’s genetically engineered is completely irrelevant to the plot. Basic storytelling is a struggle throughout. At one point theres a devastating incident with some deadly spores and the show never attempts to make it clear whether it’s a biological attack, a natural occurrence or a cack handed way of cranking up the Man Pain for one of the characters. It also cheats. That opening sequence? Plays out very differently in context. There is literally no need for the message that Blonde Doc sends out. It’s just a cheap way to suck you into the action from the beginning. 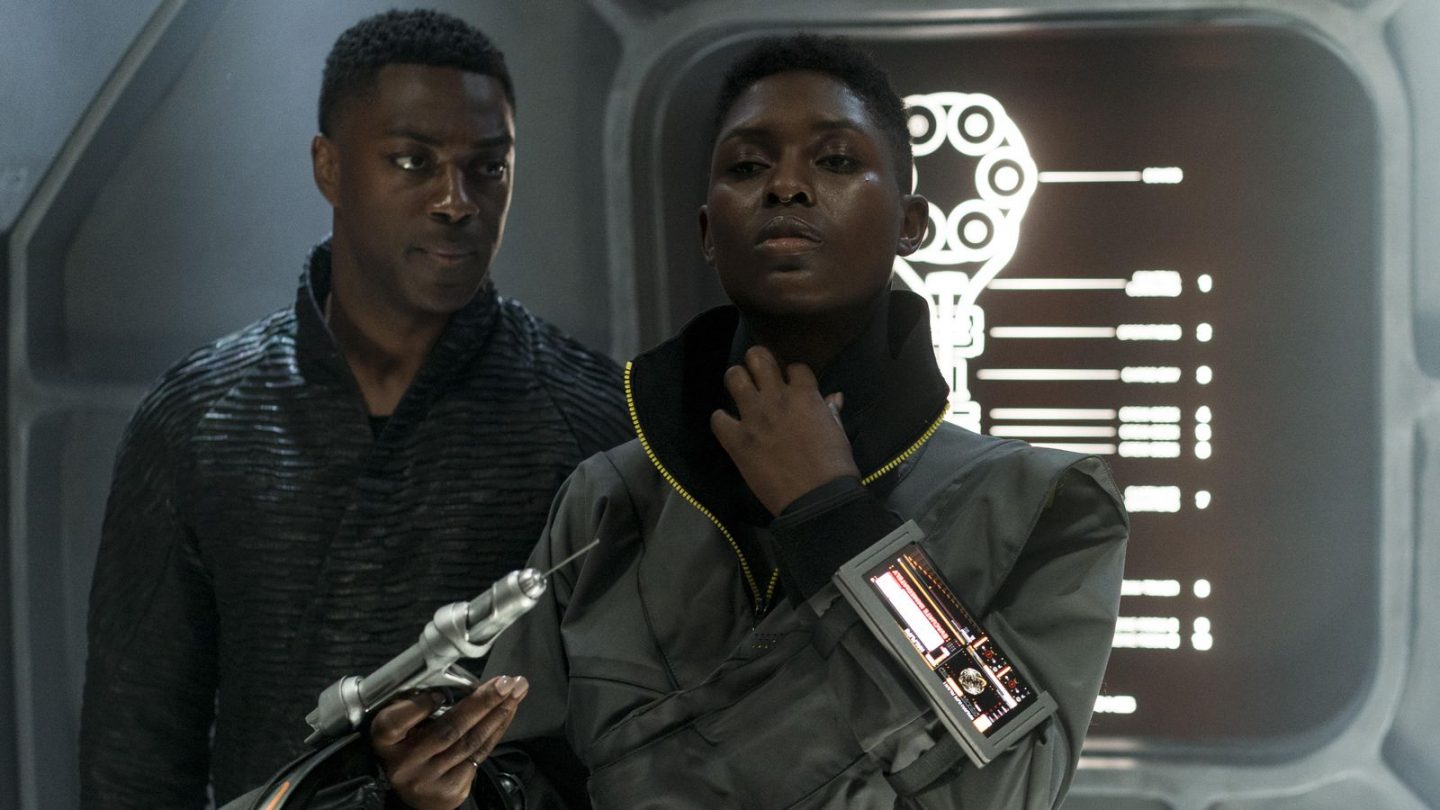 A LOT happens to the characters over the course of the ten episodes but I confess with the exception of Thale and Lommie (the only two actors to overcome the limitations of the scripts) I didn’t care a tuppance about any of them. And I cry at adverts. Hot Prof is a complete dick that only cares about seeing his dead daughter again. Time and again I found myself bemused by why anyone followed him onto the ship. Blonde Doc is ineffectual, Mel may as well not be there and Beirdy Weirdy dials it all the way up to 11,000 at one point. Only Captain Extra seems to know what sort of series he’s in and acts accordingly. Im using nicknames rather than names as I literally can’t remember who most of them are despite having watched 10 episodes. That’s how poorly characterised they all are.

It’s also super male gaze-y. Jodie Turner-Smith has a very fine physique indeed but I did worry rather about her nipples chafing considering they were standing to attention in every single scene. By the end I just wanted to wrap her up in a blanket and feed her tea until she warmed up. Mel is the heroine in the novel but here is strictly relegated to ensemble player. She’s framed by the camera throughout as a sci-fi sex pot and introduced with a scene of her naked in the shower spouting terrible purple prose sex talk to a hologram of Captain Extra and to be frank the character never recovers from it. It’s just impossible to take her seriously. Blonde Doc wears sensible white polo neck jumpers which naturally are completely see through so you can see her bra throughout. Because obviously us professional ladies like to make sure our tits are visible at all times. She also gets to sport some marvellous outfits which are literally designed to be a shelf for her boobs. No way were they comfortable. Gretchen Mol and Jodie Turner-Smith are both beautiful and women should be able to wear as much or little clothing as they choose but none of the men are shot or framed like this so why are the women? Hot Prof doesn’t have visible nipples in every outfit. There’s also an egregious example of fridging to increase man pain and Hot Prof gets to cheat on his wife with little justification for it (yes she’s undergoing memory removal to cleanse herself of the death of her daughter and theres the suggestion that this may ultimately include removing herself of him but we don’t actually get to hear her make that ultimate decision – he decides for her and then decides he’s now free to shag around- nice!)

Nightflyers is a pleasant enough diversion if you’re particularly stumped for something to watch, you’re a fan of any of the actors, or you just want some background noise for when you’re doing anything else but as a series it’s poor. Go watch Contact instead.