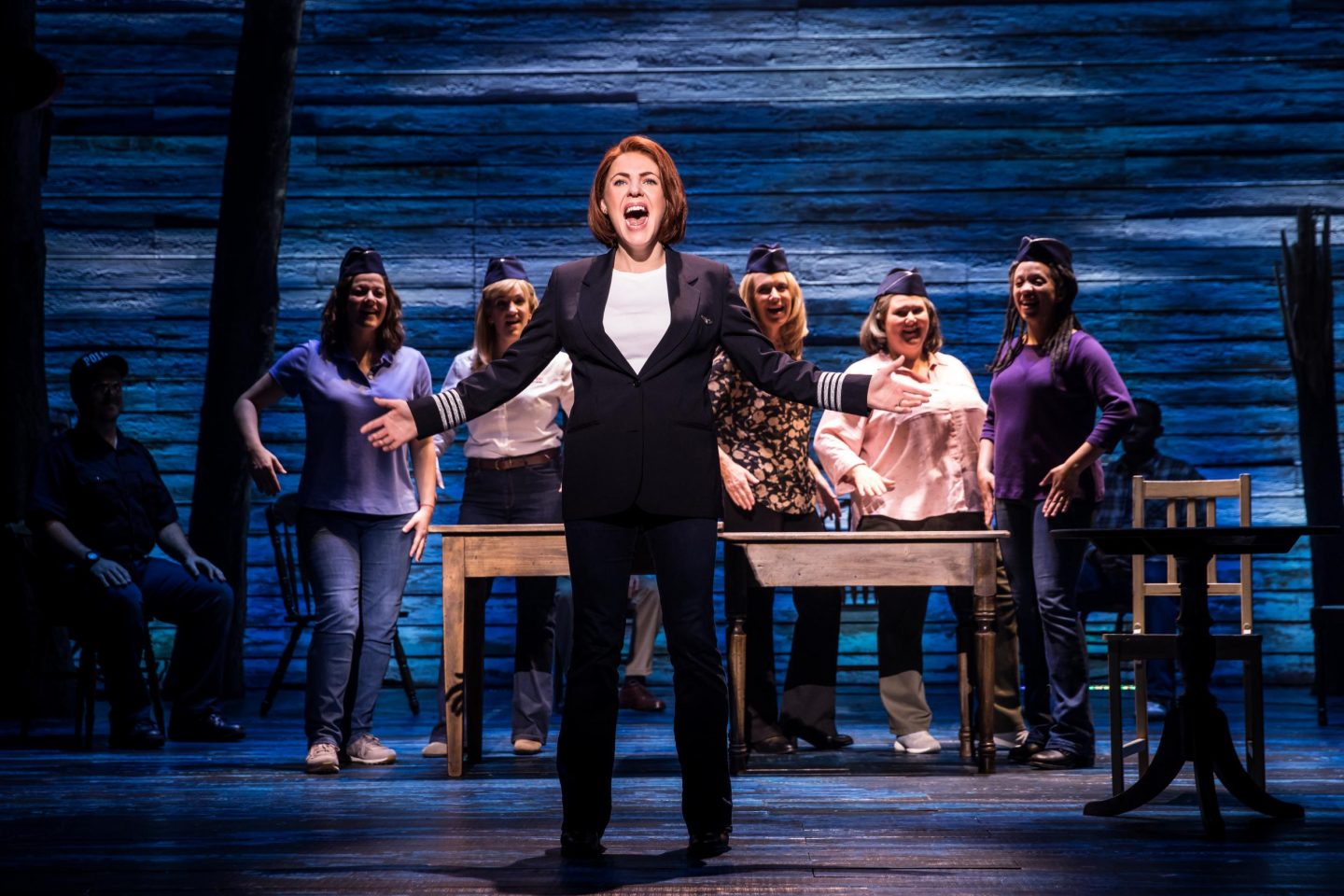 On September 11 2001 in the immediate aftermath of the attack on the World Trade Centre the United States closed its air space to prevent any further attacks. Just one small problem there were already plenty of planes in the air waiting to land. Thirty eight of those planes were diverted to a tiny little town called Gander in Newfoundland, Canada. 7000 people (almost as many who lived in the 9000 strong town) ended up staying in Gander for 5 days until US airspace re-opened. But the good people of Gander were more than up for the challenge.

Come from Far Away-a brand new musical import from Broadway from David Hein and Irene Sankoff (who together wrote the book, music and lyrics) tells the story of the people of Gander & those who were on the planes over those 5 fateful days. A cast of 12 plays everyone in Gander and various different passengers. While some characters are composites of their real life counterparts they’re all fascinating and so wonderfully realised -the Mayor who had to deal with an influx of scared, tired, hungry strangers into his town, the news anchor in her first week on the job handed the story of a lifetime, the gay couple too nervous to share their sexuality with the denizens of the small, religious town only to discover it’s the most gay friendly place ever, the Rabbi whose presence in the town prompts a resident to confess that his family left Germany before WWII and was warned never to reveal to anyone that he was Jewish, the world renowned Muslim chef who was constantly kicked out of the kitchen and the Texan divorcee and British businessman who met when their planes landed in Gander and who fell in love.

The set is extremely simple but clever use of minimal props by director Christopher Ashley means that the cast can evoke being in bars, coffee shops, planes & even a romantic mountain overlook without our imaginations being strained too hard. The music is stonkingly good fun -like Gander itself it’s a mix of styles and influences with songs Welcome to the Rock & the Finale/Screech Out especially sure to make you want to jump to your feet and stamp and clap along. The band is brilliant – it’s the only show I’ve seen where the band get their own curtain call and it is thoroughly well deserved.

The cast is brilliant -not a weak link among them. I especially liked Rachel Tucker (who has one hell of a set of pipes) who plays Captain Beverley Bass -one of the captains of the planes and the first female captain of an American Airlines plane. She also plays a citizen of Gander who is amusingly rather taken with a BA pilot. Also brilliant is Clive Carter as the Mayor of Gander, Cat Simmons who brings grace and soul to her role as a stranded passenger whose son, a firefighter, is missing and Jonathan Andrew Hume who plays multiple rather tricky roles including Kevin one half of the gay couple stranded in Gander. I was also deeply charmed by Nathanael Campbell who plays a New York native who is baffled by the generosity of the townsfolk of Gander. Initially worried about his wallet being stolen as he slept he soon realised that wasn’t a concern when he was asked to take everyone’s grills from their homes for a cookout. Not only did he not get shot as he feared but every place he went they offered him tea and offered to help him steal their own grills!

The generosity of the people of Gander was extraordinary.  Shops let people take what they needed off the shelves. Residents invited people into their homes to stay and have showers. They cared for 7000 people for 5 days and wouldn’t take a penny for it. Come From Far Away tells their story and it’s a reminder that sometimes, just sometimes, people can be AMAZING.

We’re living through rough times. The world has gotten a little darker, a little nastier, a little more unkind than it used to be a few years ago. The news cycle is non stop misery & the realisation that so many people in this country voted to be more insular, to return to a darker more unenlightened time has been very hard to deal with. But Come From Far Away is a wonderful antidote to all that misery. It’s a glorious warm hug of a show. It will reinstate your faith in humanity if only for a couple of hours. So put your troubles to one side and race to the Phoenix Theatre and lose yourself in the kindness of the good people of Gander. You won’t regret a second if it.

Come From Far Away is currently in previews and opens next week. Today Tix has £25 rush tickets daily.